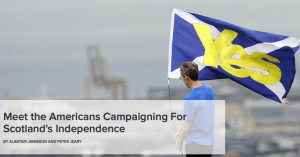 Scotland held a referendum to determine whether it should be an independent country. In the build-up and aftermath, Pete Reid was invited to give his opinion on the issues by several national news networks here in the US.

“The subject of the referendum has replaced haggis or golf as the go-to conversation of choice with strangers once they hear my Scottish accent,” said Peter Reid, an Austin, Texas-based attorney from Scotland who has lived in the U.S. for 12 years and is a core member of Americans for an Independent Scotland. “Hawaiians are particularly interested in the independence debate because of their own sovereignty movement.” 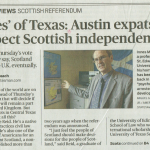 The full article can be read on the NBC website here.

Patrick Beach of the Austin American-Statesman interviewed Pete twice for Austin’s biggest newspaper. On September 17th, the day before the referendum, the paper published a lengthy interview with Pete under the headline: “‘Ayes’ of Texas: Austin expats expect Scottish independence”. The article started as follows:

The eyes of the world are on Scotland ahead of Thursday’s referendum that will decide if that nation will remain a part of the United Kingdom. But what do Scots in Central Texas think about all this?

You can read that Statesman interview in full here: Part 1 and Part 2.

Pete also spoke with CBS, ABC, and Comedy Central’s ‘Colbert Report’ in the days before the referendum. He was also asked by Fox News to write an opinion piece to respond to the results as they came in. The article was then published on the front page of the Fox News website on the morning after the referendum with the headline “Scots Show World How To Settle Nationhood Questions, by Pete Reid”. The article is now archived here on the Fox News website. 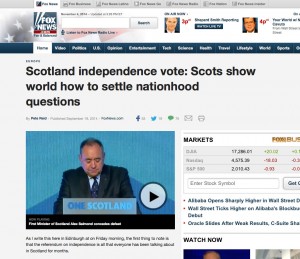 In October, the Austin American-Statesman interviewed Pete again to get his thoughts on the outcome of the referendum after the people of Scotland voted against full independence by a margin of 55% to 45%. Pete discussed his emotions on the day after the vote, and why he believes that independence is ultimately inevitable despite the recent vote. That interview can be read here and here,