As part of its campaign to refocus national attention on racial injustice in our society, UT Law CLE has highlighted a presentation featuring Pete Reid to help members of the community better educate themselves on issues of bias and racism.

The 2018 Studio Webcast was conceived and hosted by Pete Reid and also featured Toysha “TJ” Martin of the Austin Black Lawyers Association and Jason Boulette of Boulette Golden & Marin LLP. It was entitled “Athletes and Controversy: Making a Stand or Taking a Knee” and it explored the legal and civil rights implications of protesting as a professional athlete. Altogether, UT Law CLE has included four videos as part of its campaign including an examination of unconscious bias in the workplace by Katrina Grider and a look at race and new ethics by Professor Tracy McCormack.

Pete Reid Law is proud to stand with the black community to fight against racism and injustice wherever they exist.

The UT Law page can be accessed here, and the video can be viewed in full here. 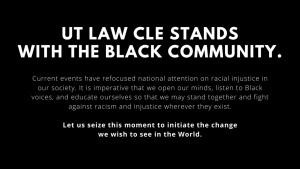 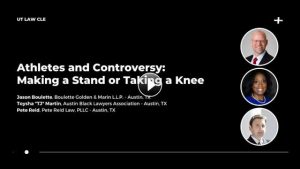