Lulu is a beloved Great Pyrenees dog who was stolen from the yard of her owner, a documentary filmmaker, one summer afternoon. Lulu was eventually picked up by Austin Animal Control, and wrongly given to a family in Round Rock who claimed to be the dog’s true owner.

The Filmmaker had previously retained Pete Reid Law for legal advice on a music documentary, and when she was unable to convince the Round Rock family to return Lulu to her, she again turned to Pete Reid Law for help.

Although this was not a typical property dispute, the State of Texas does consider pet dogs to be “property in the eyes of the law”, Strickland v. Medlen, 397 S.W.3d 184, 185 (Tex. 2013). With emotions running high, Pete Reid Law agreed to take the case.

Another unusual aspect of this dispute was that no one knew where Lulu was being held until a mysterious Facebook Page appeared entitled ‘Lulu is reunited with her Family’. The page purported to show photos of Lulu in South Texas, with the author attacking the reputation of the Filmmaker. This ignited a social media firestorm as the internet began to campaign for Lulu to be returned to Austin.

When the anonymous Facebook page then announced that Lulu was ‘dying’, and then that she would be ‘North Dakota bound in less than 1 week’, it was apparent that immediate action was necessary. Pete Reid Law filed a lawsuit with a request for an emergency Temporary Restraining Order. The lawsuit sought to enjoin the authors of the Facebook page from removing Lulu from Texas, and to stop them from taking any action that would be detrimental to Lulu’s health.

The lawsuit also alleged conversion and sought a declaratory judgment that the Filmmaker was the rightful owner of Lulu. Appearing before Judge Karen Crump late on a Friday afternoon in Travis County District Court, Pete Reid argued and obtained an Ex Parte Order that whomever was in possession of Lulu could be in contempt of court if the dog was removed from Texas. The Order was then served on the Round Rock family and on the authors of the Facebook page via social media.

Less than 24 hours later, Pete Reid Law received a message that Lulu would be released to a doggy day care facility in Williamson County, and that she would be available for pick up later that day, so long as the lawsuit was dismissed.

After some tense negotiations, an agreement was reached and around 6pm on the Saturday evening, Pete Reid Law received a call that Lulu was now safely back in the arms of her owner. 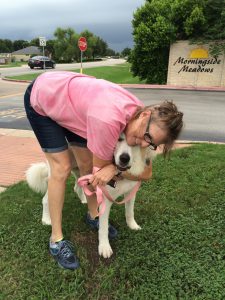 To everyone’s relief, Lulu was not dying. She was unharmed and healthy. The lawsuit was dismissed and the mysterious Facebook pages were deleted.

In a case with similar facts, the Texas Supreme Court recently wrote that when a dog is impounded, there is no automatic transfer of ownership, and an animal’s owner does not lose her right to the return of her property.

Although the Court affirmed that dogs were still deemed to be property, the Court recognized that ‘Texans love their dogs”, adding that “a beloved companion dog is not a fungible, inanimate object like, say, a toaster.”