In October 2017, Williamson County was the stage for a grueling jury trial between a married couple and the builder of their dream home that turned into a nightmare.

At the end of the week-long trial, the 12 person jury awarded damages and attorney’s fees to Pete Reid Law’s clients, but it was not until June of 2018 that the verdict was finally confirmed by Judge Betsy Lambeth.

The case revolved around construction of a new home in Liberty Hill. The Builder was well known in the community for building homes in the area, and the Homeowners experienced no problems with the house itself. However, after a few months in their new home, it became apparent that the large front yard was not graded properly so that whenever it rained, the house was at serious risk of flooding.

The Homeowners learned that the cost to repair and install necessary drainage improvements to the property would be in excess of $45,000.00.

The Homeowners initially hired Pete Reid Law to try and encourage the Builder to pay for the necessary improvements, but the Builder refused.

Pete Reid then visited the site with an expert engineer who identified several construction defects in the grading and drainage of the front yard.

Those opinions formed the basis of the lawsuit which was then filed in Williamson County for deceptive trade practices, breach of contract, breach of warranties, and negligence.

As the Builder had conveniently formed a new company after the construction of the home, the lawsuit was filed against his old company, his new company, and the Builder individually.

The Builder retained the Fowler Law Firm to defend him, and his attorneys quickly filed a motion to motion to try and have the case dismissed as against the new company and the Builder individually. After a contentious hearing, the Builder’s motions were denied and the case proceeded against all of the named defendants.

Eventually the matter was set for trial for October 2017.

Pete Reid’s preparation for trial took the best part of two weeks, which included several meetings with his clients and his experts, and the review of several thousands of pages of construction documents, plans, and reports.

In the weekend before trial, last ditch attempts at settlement failed and after the attorneys selected a jury on the Monday morning, the trial before Judge Betsy Lambeth of the 425th District Court began with opening statements and a preview of the week ahead.

Over the next four days, twelve witnesses were examined and cross-examined, including the parties, their experts, former clients of the Builder, and subcontractors who worked on the job.

Following emotional closing arguments, the jury deliberated for more than six hours before returning and giving their verdict to a hushed and expectant courtroom.

The jury announced that the Builder had failed to perform services in a good and workmanlike manner, and awarded damages and attorney’s fees to the Homeowners and Pete Reid Law.

Somewhat confusingly, the jury also answered affirmatively to a question that would also have awarded $47,000 in attorney’s fees to the Fowler Law Firm. This meant, that at the end of the trial, neither side was quite sure who had won.

Judge Lambeth agreed with Pete Reid that the award of fees to the Fowler Law Firm should be disregarded as immaterial, and entered judgment on behalf of the Homeowners. In short, Pete Reid Law had won.

The Final Judgment awarded the Homeowners damages and attorney’s fees.

A message from the clients: 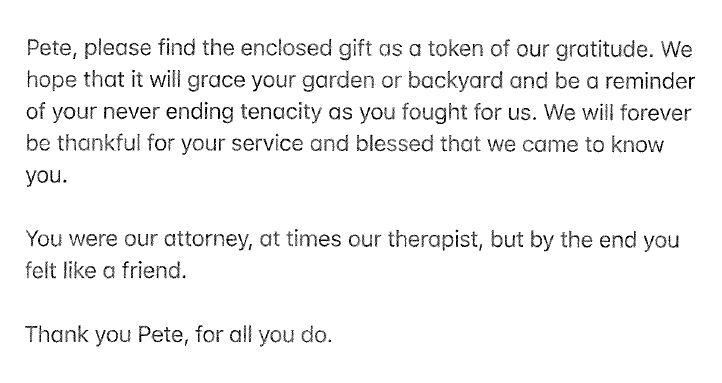